Bridge construction has returned. NTZMK is refreshing its skills

Bridge construction has returned. NTZMK is refreshing its skills

To adequately meet athletes and guests, the host is actively updating the facilities. In key cities stadiums are being built, infrastructure is being upgraded, tourist routes are being improved.

The giant corporation JSC “Russian Railways” started the quality improvement of the transport services for passengers prior to major sporting events. The company sent about 15 billion rubles for preparation and reconstruction of the 31 railway stations.  The sum was announced by RBK in the late spring, with reference to M. Schneider, the Head of the Russian Railways business unit “Passenger Transportation” Department. In addition to these works, the money will be spent on the construction of new platforms, bridges and creation of comfortable conditions for limited mobility passengers. In particular, stations will be equipped with ramps, tactile tiles, elevators, low grounds ticket offices. Also the rooms will be equipped with electronic info-boards for passengers in Russian and English and mobile devices charging stations. Major works are in process since January 2017.

Two new NTZMK orders 3105 and 3106 are pedestrian bridges over the railroad tracks. They are just a part of large modernization carried out by the State Company.In production shops of the enterprise the first steel structures of arched aperture for Ruzayevka and Saransk station buildings Kuibyshev railway are gradually assembled and accepted.

«By types of manufactured products, our factory is considered multipurpose.  Wide profile allows us produce steel structures for industrial enterprises, as well as for sport buildings and facilities.We are not as specialized manufacturer of bridges as “Kurganstalmost” or “Voronezhstalmost”. Bridge construction is a very responsible, time consuming process that requires large production areas, – explains the Marketing Director Dmitry Druzhinin. – At the moment the company is heavily loaded with anchor orders and lacks the space for control assemblies.

Therefore, the bridges can occupy only 10-15% of the manufactured products. That is, we can produce up to 400 tons of bridge constructions per month. Due to the fact that the plant is included in the register of suppliers of steel structures for arched aperture bridges and anchor parts for the needs of the JSC “Russian railways”, we have received orders for footbridges for the 2018 FIFA World Cup. The road bridges for Khanty – Mansy Region are also in production. I believe that in the coming months these volumes will be sufficient to maintain our presence in the market and not to lose our skills”.

Railway bridges were not manufactured at the factory for a long time. In 2011 the factory had a similar project. NTZMK sent to Khabarovsk a pedestrian bridge over the highway 32 m long and weighing 18 tons. In 2015 the company constructed the road bridge across the river Nejva. 3-span design was 126 meters long and weighed 236 tons. Bridges to go into production this summer are much less in volume: 100 and 150 tons. The length of the Ruzaevka station structure, which is in shops now, is 21 meter. KMD drawings for these orders were produced by third-party organization.By the project pedestrian bridges will be comfortable and safe for passengers: with elevators up to 13 people capacity, covered arcade and CCTV. According to the Mordovian news information, each such road crossing will cost about 50 million rubles. All expenditure is paid by the JSC “Russian railways”. The structures must be delivered to the customer in August and September. We learned about the progress of the projects in several divisions of the plant.

“For bridge construction per GOST 6713 HSND sheets are required. This type of metal was provided for these projects, – said the leading MTPD engineer L.V. Atanasova. – We requested 300 tons of metal sheets for both orders from our trusted supplier in Novotroitsk. Due to the fact that the structure will be a pedestrian bridge, sheet thickness is pretty small: from 10 to 20 mm. All the certificate requirements are confirmed and the input control in the CFL is conducted“.

“The requirements are the same for all objects, whether it is the road or railway bridge. The entire production process is governed by the STO – GK Transstroy 012-2007 “Steel structures for bridges. Fabrication”. The only difference is that control assemblies for this bridge are not required, because each plate goes for individual bearings, – Y.A. Bakina, the leading quality control engineer of the company opens some manufacturing features.- Plate elements are up to 21 meter length. The main problem is the waviness of the sheet after joining and welding the seams. The major part of the drawings has already been closed and transferred to 6th and 7th spans. I can say that prefabricated elements were within allowable tolerances. However, particular attention while manufacturing should be paid to processing the edges and gaps tolerances during the assembly.

The certified bridge inspector – T.M. Lenjova works with us. The final inspection and signing of quality certificates for steel structures is her responsibility”.

On a slab in 7th span there is the first assembled drawing to order 3105 – drawing No.10. On a nearby slab the assembly of a large block of bridge is in progress. Later near the southern wall the similar construction from the 9th drawing will appear. And in 6th span they will make drawing No. 8 with a different configuration. 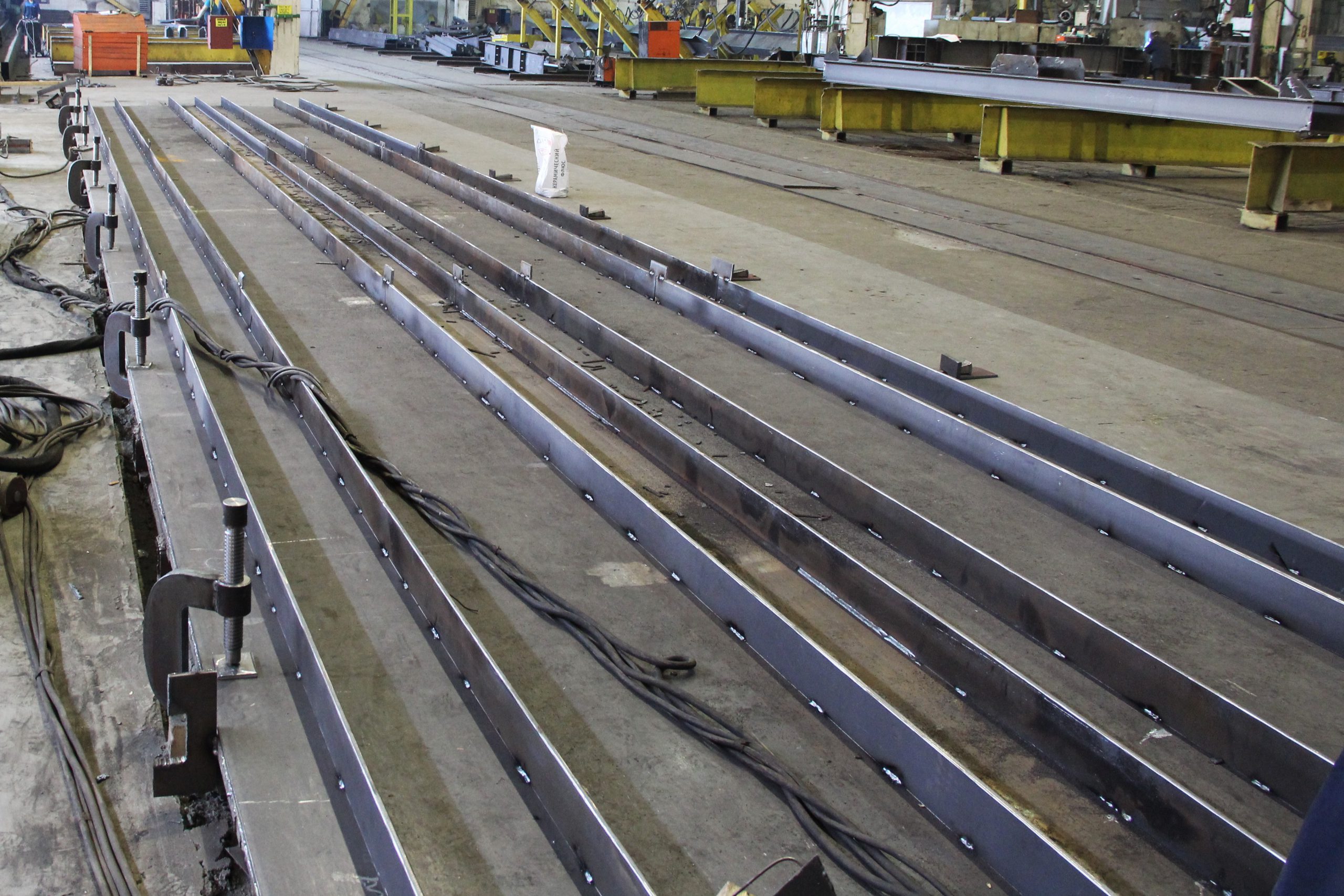 “I haven’t encountered such designs, although bridges have already been built at the plant. Requirements for them have always been special. This also applies to manufacturing of semi-finished product, assembly and welding, – says a steel structures assembly fitter S.L. Kalugin. –The whole footbridge consists of different height elements. To match the angles, our technologists have separately developed duplex cradles.

The assembly began on Friday. My cross-shift installed the cradles and starting on Sunday we were busy with assembly. We laid out the beams, got the T-beams in place and so on. We are erecting the structure upside down with the working surface at the bottom. Technology is written out in detail, so the main thing is not to deviate from it.

Now everything is assembled with dot welds, to allow any changes. Moreover the construction turned out to have large gaps, about 6 -7 mm. In other orders it could have been possible to increase the leg of the weld and penetrate but here it is unacceptable. We are waiting for geometric dimensions to be checked and the issue of the gaps considered.”

By the beginning of August in Ruzaevk the piles field for a pedestrian bridge was finished. The builders plan to start the erection of arched aperture constructions this month and the installation of elevators in September. The new facilities will be brought into operation in December 2017.

After NTZMK copes with current orders and refreshes skills, it will again work on bridges. For the order 3119 the company must produce two automobile bridges. But we will tell you about that another time.