What the blast stoves being assembled piece by piece will look as a whole is still to imagine. But to understand the importance of these elements, here is some information.

Hot blast stoves are regenerative air heaters. Each of them is a cylinder construction filled with multileveled grid of checkered firebricks.

That is why there are minimum two hot blast stoves. The blast furnace shop usually operates with three (like future furnace number 7) or with four apparatus.

Technical equipment for the domes assembly was set up in the shop number 8 in the middle of March. “It does not have any specific name”, says A.A. Lobanov, a very experienced assembler. – The fake level is erected. The center is a fixed on a column circle to which we attach the petals. This type of structure gives the opportunity for stiff support of the “dome” configuration.  The enlargement of the structure and all the welding was done by “UralDomnaRemont-Ekaterinburg” representatives. 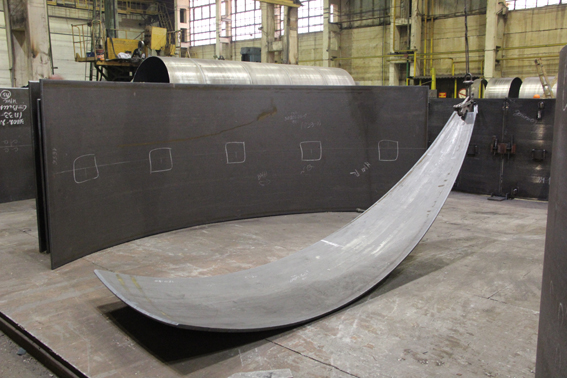 Separate attention should be paid to the elements of the dome itself. Gracious bended “petals” are 3.27 meters each.  Each dome consists of 16 pieces.

“The last level of the tore part consisted of twenty-four elements. This part has less details but the bending process is more complicated: the elements are longer, the radii are sharper so the alignment should be more precise. It can be overdone or under bent in some places and because of this the alignment is later done manually – says about the peculiarities of the process S. Kuzminykh. – There are some harsh moments. Each element takes over an hour. Have bent, have aligned, and submitted. We can produce seven elements in one shift”.

Two of the domes have already passed the control assembly, enlargement and welding stages. They are already on the erection site. Meanwhile the last, the third one is being assembled in the eighth shop. “Control assemblies were successful – comments D.A. Ershov, Chief Factory Engineer. – Disregarding the fact that on the previous level there were only five welds and this level has twenty-four. The shrinkage of the metal takes more. That is why we decided not to proceed with the key plate. On the site the dome will be put in place, checked, aligned and only after that the final element will be added and welded up. Besides we decided not to cut the key plate. In thirteenth level, after all alignments on the site the final element turned out to be 50 mm narrower. The metal thickness is 25 mm. We are not sure how much shrinkage will occur so the final alignment will be done on the site by Sverdlovsk workers. By the end of the week the third dome will be delivered. We meet the contract dates. Taking into consideration the fact that we are manufacturing structures like this for the first time, I think everyone worked just well.”