“Molodost’” (Youth) Comes to the Plant

“Molodost’” (Youth) Comes to the Plant

Fabrication of steel structures for sports facilities is though not a priority but an important activity for NTZMK. The enterprise was engaged in large projects (Fisht Stadium) and local facilities where possible future sport stars are training.

One of the new orders, umber 3111, refers specifically to such buildings. The object, which the workers will be working on during the summer months, is called “Youth” (Molodost). This is an indoor ice arena to be built in Krasnouralsk. “Preparatory work for the subsequent erection of a modern year-round arena has already begun. The city website reports that now construction machinery is busy demolishing two outdoor skating rinks. After all the preparatory work and planning of the plot is finished they will start the construction of the basement and go on further according to the project.

The construction will be financed by parent company OAO Svyatogor – UGMK. Within the framework of cooperation with the Ice Hockey Federation of Sverdlovsk Region the Mining Company will provide all conditions for the development of the sport. The holding company has planned to build sport facilities for youth’s sports in 5 cities of the region: Verkhnyaya Pyshma, Kirovgrad, Krasnouralsk, Rezh and Revda.

Each arena will be a two-story building painted in corporate UGMK colours: orange, grey and white.

“Structurally they are two adjacent buildings, – the Chief Designer Department comments on the project. – One consists of columns, beams, trusses and girders. The second also has columns but the amount of beams is much smaller, because the ice field takes up a lot of space. Here we have farms’ overlays over the span. In addition, the project has ventilation elements — “glasses” and various billboards. Pretty bulky, they consist of small diameter pipes with complex three-dimensional form”.

“But overall, nothing special, just standard project,” – said the head of the Design Bureau, N.V. Bulovich. – About half of the KMD drawings are already in production. We are planning to finish the rest of them before the end of June.” Manufacturing over 270 tons of steel structures will take July and August. 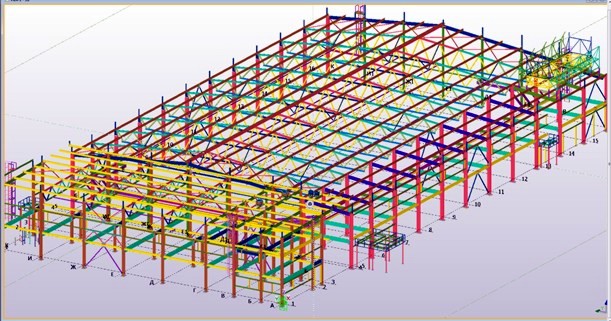 For NTZMK this arena will not become a novelty. Thus in 2010 the company sent 450 tons of steel structures for the indoor ice rink “Gornyak” in Uchaly. 50 tons less were manufactured for the skating rink framework in Neftekamsk in 2012-2013.  Indoor skating rink weighing about 140 tons of steel structures was also designed by the plant for the town of Sosnogorsk. For the hometown, in 2014, 768 tons were manufactured for the construction of FOK “Presidential” which also provides the ice arena.

In Krasnouralsk the sport facility is assumed to go in operation by September next year, according to the UGMK Directorate. The size of the rink will be 60 meters long and 30 wide. In addition, the complex will include a workout gym, skate rentals, a regular gym, drying and shower zones, doctor’s office, offices for the staff, meeting rooms, equipment storage and coachers’ rooms.  Simultaneously 50 people will be able to train on the rink.