On August, 10th Holiday was divided into two central events and was very generous in terms of awards. At the factory stele the distinguished staff members were presented with honorary certificates and letters from the Ministry of Industry and Science of the Sverdlovsk Region, Diplomas of the Trade Union of the Construction Industry of the Region and the Regional Committee of Trade Union of Builders. In addition, the professional holiday was celebrated by recognizing professional achievements and successes of the winners of the contest “Best in Profession”. 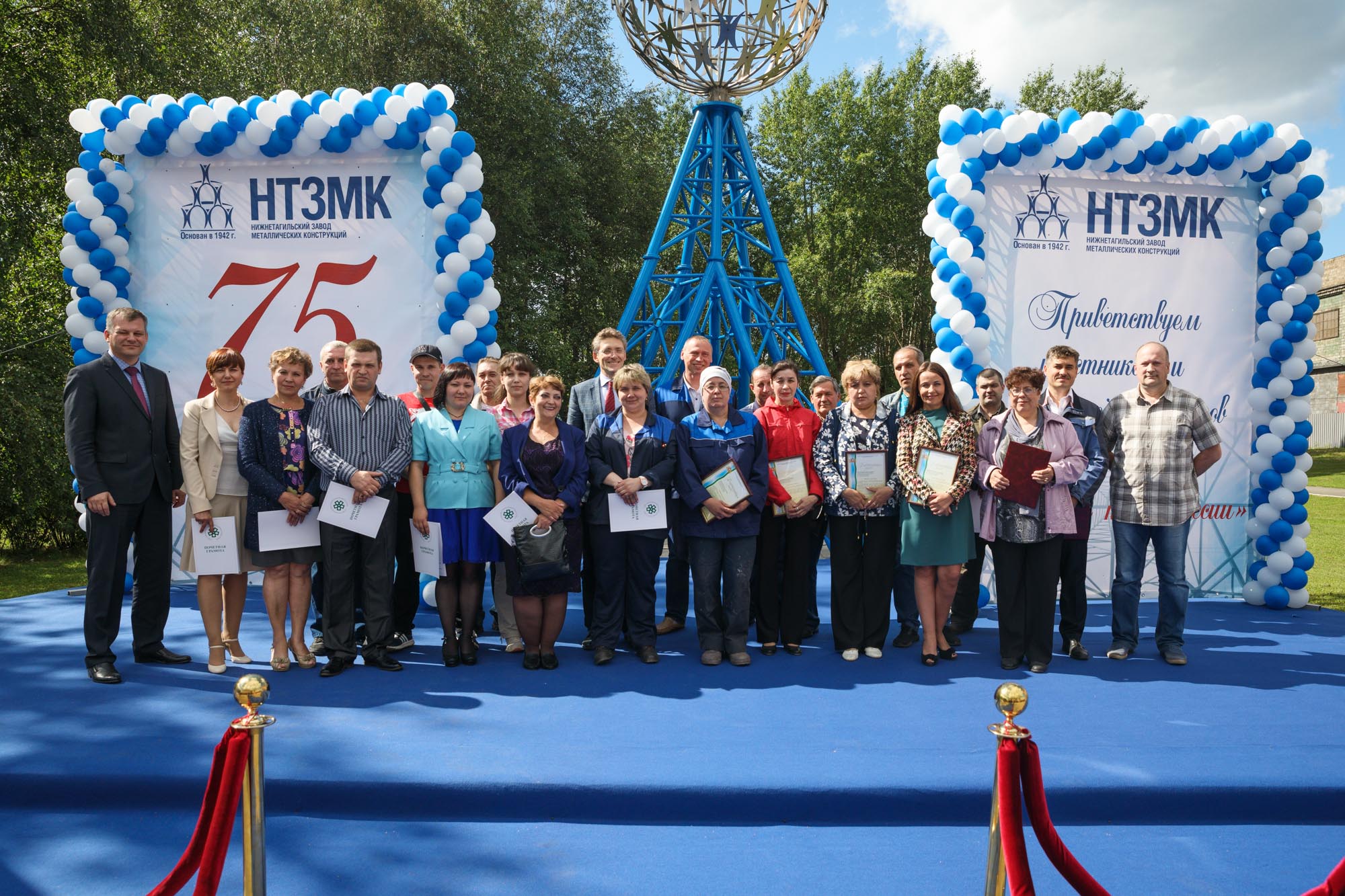 In the Drama Theatre

In the evening  Nizhny Tagil Drama Theatre, named after D.N. Mamin-Sibiryak, gathered in the hall the plant’s veterans, workers and guests – total 474 were invited.

Gala Anniversary Evening was opened with the film about the factory created by the Sverdlovsk Film Studio. Staff and managers of the enterprise talked from the big screen about the life of the plant and complex objects of the last five years.

“We have achieved a lot, but more is to be done,” said CEO Vitaly Parfenov, welcoming the people gathered in the hall.

For several hours the festive event, like a mosaic was formed from the bright moments: congratulations, music, applause and awards. The latest should be described separately.

The highest corporate award “The Honorary Worker of ‘NTZMK’ ” in the 75th Anniversary of the company was presented the design engineer of I category V.M. Ryzhikova.  “My parents worked at ZMK. After school I came to the factory and never regretted it. I like my profession and our friendly staff. I want to continue working,” admitted Valentina Mikhailovna, though she is over 50 years in service at the enterprise. 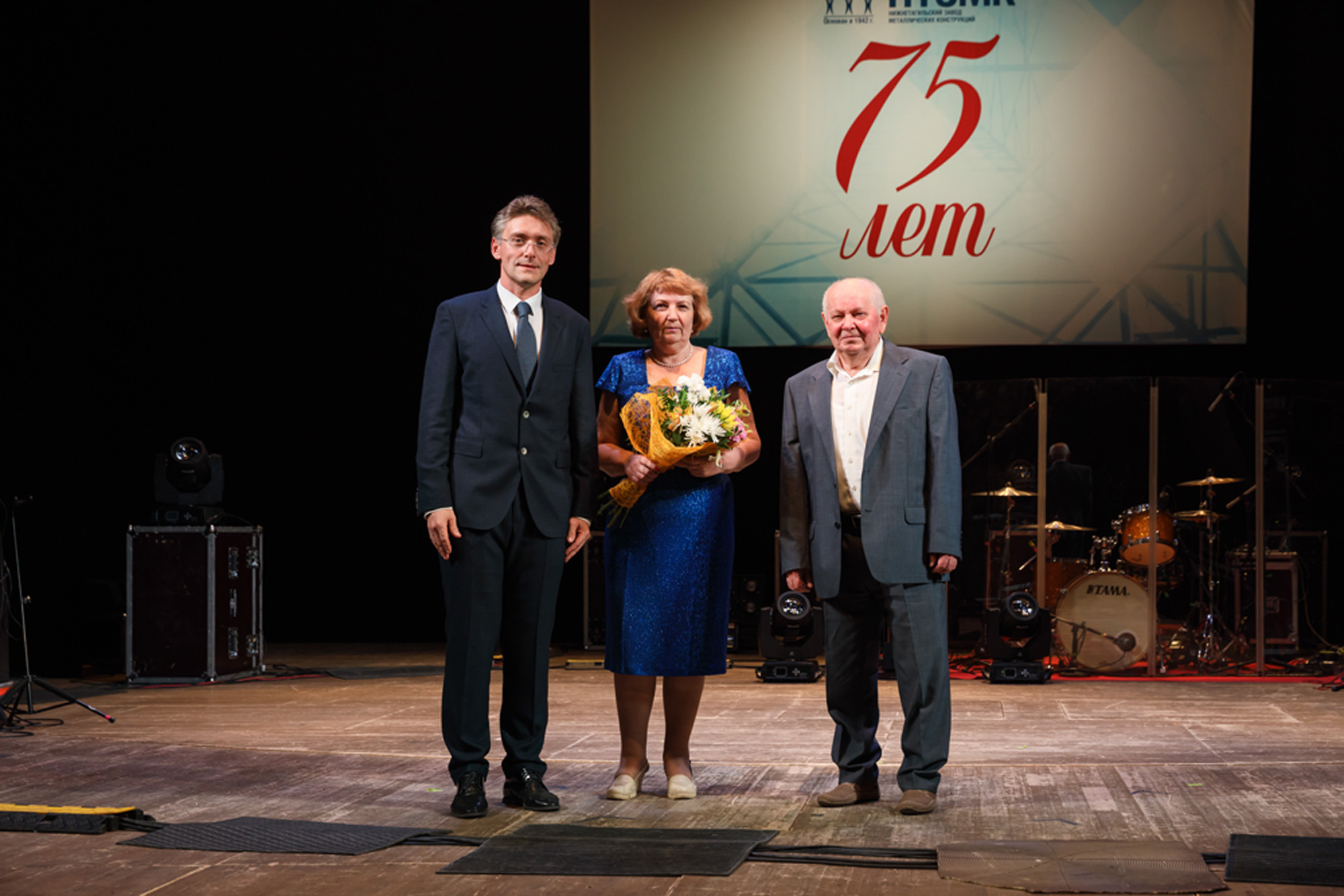 Corporate Badge of Recognition the Administration established 5 years ago. It is the highest level of achievement recognition and is awarded to encourage the company’s employees to work more effectively and fruitfully. In 2012 A.K. Zjukov, General Director of LLC «NTZMK”, A.S. Kolesnikov, the electric welder on automatic and semi-automatic machines of 5 grade, and V.I. Romanov, metal construction assembler of 5 grade were awarded the Corporate Badge of Recognition.

Deputy Governor and member of the Government of Sverdlovsk Region A.G. Vysokinskiy in his speech mentioned: “75 years is a significant date for a person but for the plant of this magnitude it is only the beginning. NTZMK is considered to be one of the leading enterprises not only in this region but on the country level. Undoubtedly, the plant has got the future.

The plant in the first place is the people. People manufacture the products and bring the glory to the enterprise. People have inside, apparently, a metal frame. The very inner core that is very difficult to break.

NTZMK now builds the best objects in the country. I wish the factory wide horizons and new objects. Nice Ural Steel Structures brand should live and develop. The interim Governor of the Region, E.V. Kujvashev personally requested the greetings on the occasion of the Builder Day and promise of support to be passed over to the workers. We are convinced that constructions for the objects that we are building in the Urals should be produced in your plant”.

Having taken the stage, the plant Director A.K. Zyukov addressed his colleagues with the following words and wishes: “Our plant was the best in the USSR and is one of the best in Russia. We have participated in all famous construction projects at home and abroad. The plant exported about 30% of the orders’ amount.

And today I am pleased to see the results that the factory has achieved. I want to appeal to the veterans. To those whose shoulders at that time were burdened with great job. You have fulfilled your job to make sure the plant turned into such an advanced enterprise. I hope that the current NTZMK workers will support the plant through their work in the same way as it was done by the veterans. I wish everyone health and success”.

This evening, there was a dance team from Chelyabinsk, excellent girls – drummers, inspiring “Davlet Khan”, artists with spectacular laser show on stage. The Tagil audience was not once surprised by Andrey Barinov, parodist. Applying the images of Russian and foreign singers, an artist earned great ovations. The main highlight of the musical part of the program was the presentation of a specially invited group “Chicherina”. Workers willingly sang along familiar songs by soloist Julia and seemed very pleased to would have an opportunity to dance by the stage.

After the evening filled with sincere words and positive emotions, ZMK workers have long recalled moments they liked the most. And thus, the holiday was a success! Happy Jubilee, dear plant!

Photos from the Holiday.

Video from the Holiday.