The First Control Assembling of Stadium “Nizhny Novgorod” Are Accomplished

The First Control Assembling of Stadium “Nizhny Novgorod” Are Accomplished

Since the first days of work on the project, it became apparent that this work for World Cup 2018 simply could not become the Sochi 3-year epic: according to the plans of the general contractor (OAO “StroyTransGaz”) the frame of “Nizhny Novgorod” Stadium should already be fully completed by the end of 2016 and by September next year the object equipped with all communications must be accepted by FIFA Commission. Much less than the Sochi’s were planned product volumes: slightly more than 3 thousand tons. The most important factor in the realization of the project was extremely short delivery times.

During the first months of work over the stadium the plant completely proved its readiness for implementation of projects of this magnitude. For the successful achievement of the objectives of the Championship only regular work is needed on the technological and productive level NTZMK has reached in previous years, most of the specialists of the enterprise believe.

– In three months ahead of schedule, the shop has manufactured almost 1600 tons of pre-fabricated products for the stadium. This is half of the total order. Therefore, there is no necessity to “storm” Championship for PPS anymore”, says the Pre-fabricated Products Shop manager I. A.  Andriyanov.

– Speaking of this order, we can’t help drawing parallels with the manufacturing of our previous Olympic Stadium “Fisht”. Structurally, the Nizhny Novgorod Stadium is easier than that in Sochi, concludes Chief Technologist O. M. Tataurov. In the project there are some difficulties in welding of great thickness, the weight and dimensions of structures, specific anticorrosion protection, but recently we are not afraid of them. Neither the manufacturing of pre-fabricated product, nor its assembly, nor welding is extremely difficult for NTZMK. Yes, if a similar order came 5-10 years ago, I think it would cause much more difficulty for us. But having experience of Sochi, Astana, “Lahta”,  NTZMK can already classify Nizhny Novgorod Stadium as a moderately complex order. 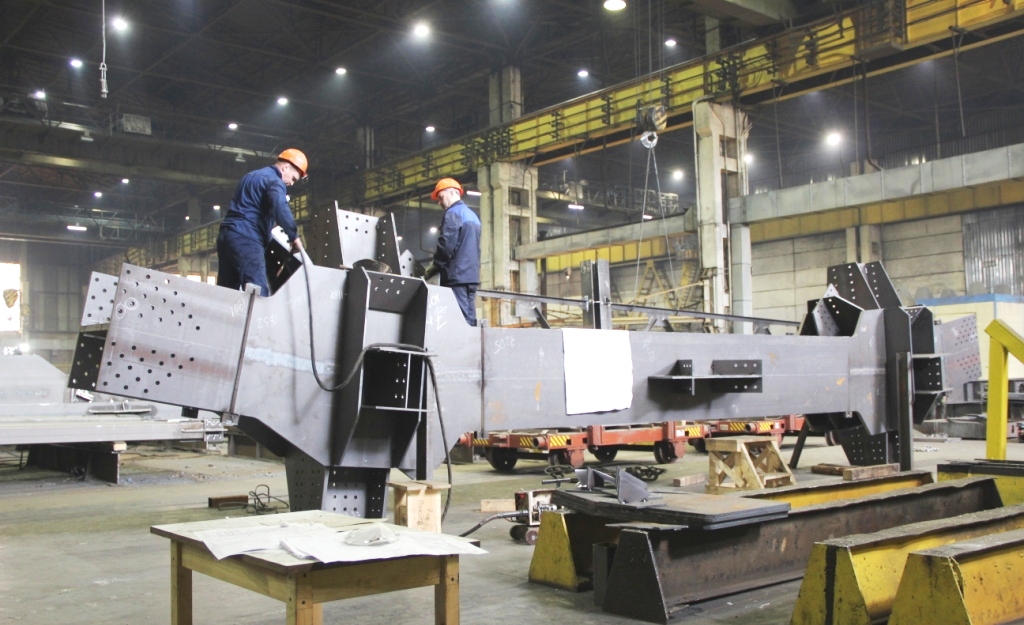 Do not think that a modest evaluation, given by our interlocutors to the technological features of the future Stadium design, diminishes the importance of the project and the degree of responsibility of each of its members. About the seriousness of the tasks imposed upon the technical control system of the plant, says the fact that in March this year, the stadium of Nizhniy Novgorod was included in the list of 73 priority projects with state funding, and the task of “increasing the effectiveness of control over the erection of each of these objects” for the oversight bodies was put personally by Prime Minister Dmitry Medvedev.

The experience of recent years also helps NTZMK to meet the high requirements of technical documentation preparation and monitoring of constructions produced by the factory.

– To measure lots of constructions for Nizhny Novgorod in the old fashioned way – roulette – would be just physically impossible, reveals the secret of error-free metal construction quality control Chief of technical control N. V. Malykh. – All dimensions of complex parts we get by shooting checkpoints with a tachymeter. Fixing all deviations in the flow-process charts with 3D model correction makes control assemblies a mere formality. The first months of work on the project gave us the opportunity to work out nuances sufficiently: to give the necessary shrinkage allowances for welding deformations, to take into account the specific requirements for welded seams, deburring and painting. The understanding how to bring this project to completion successfully is already fully formed.

The best evidence of the plant specialists’ words serve the two control assemblies of circular beams elements of grandstand overlay successfully completed on the territory of the enterprise last month. – ZMK’s constructions are usually well assembled.  And this assembly didn’t give any problems to the erectors – it  should already be fully complete by the end of the shift”, shares his impressions of the work done the Chief of construction and erection division  of ZAO “VostokMetallurgMontazh” A. E. Koryakov, completing on the 27th of June the second control assembly of roofing elements of “Nizhny Novgorod”. 60 ton construction with the area of more than 400 square meters was assembled by an erection gang of 4 people in just several hours.