The weather in the blast furnace. Continued

The weather in the blast furnace. Continued

This is not a typical welded construction but it does not differ from any other parts of blast furnace №7 in terms of quality control. The peculiarity of blast furnace quality control is that it’s the only order where after 100% ultrasound testing of full penetration seams there still is the obligatory percentage of x-ray control. “In fact, we have not applied this method in the shop for four years already. There is a tendency to avoid that type of control. It is very expensive, time consuming and dangerous. If blast furnaces were being built more often, the x-ray would have been eliminated totally. But it is a rare event so the documents have not been revised for years” – explains the head of Central Plant Lab A. Y. Bushuev.

The control percentage depends on the product and varies as follows: automatic welding requires 1.5 % and semi-automatic takes 3%. “The percentage is small but it is and takes time. Seven shots to be taken of one structure or of several ones, makes big difference. Taking into consideration several shooting modes, shots development time and analysis we have about 3 hours in the first case, and different products with various thickness of welded elements can take almost full shift. For example, with cylinder elements of Cyclone we check the T-weld (base plate to shell) and plate-to-plate weld“. 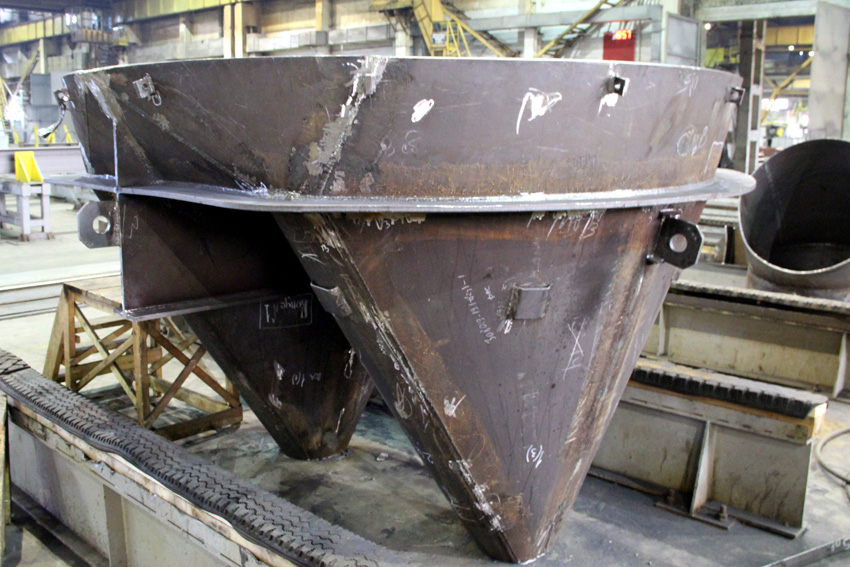 Regarding the bell construction the ultrasonic control from inside is almost impossible but from outside we can provide total control.

After the testing exposed lots of failed welds on one of the bells we had questions. Probably that bell was the first one to try out the technology. The second bell from NDT specialists’ point of view is much better. “First structures are always with some faults and high percentage of defects. While proceeding with the order of non-typical elements we achieve perfection” – Andrew Yurievich shares the logic.

“In brief, the dedusting process is as follows: the fume-laden gas gets into the cyclone then to scrubber, further to the demister and comes back to the heater, – explains Production Director D.A. Ershov. – We accept for production lots of structures that we would have denied earlier. The Cyclone is one of such structures. We are planning to finish it this week. Step by step, level by level we deliver it to the erection site providing the control assemblies. NTZMK has only 60 tons left to be delivered.

Proceeding with the dedusting system the plant has already delivered the first layer of 137 tons scrubber and now we are rolling the second one.

The bell rolling is awaiting for the production of the demister. This structure will weight almost 90 tons. 60% of KMD drawings are already develop for this structure.

The cleanness and the “weather” in the blast furnace and in environment depend directly on our plant. You should agree that it sounds complimentary in the year of ecology, shouldn’t you?