The weather in the blast furnace

The weather in the blast furnace

All known technological processes of iron and steelmaking and their following conversion are characterized with huge waste production such as damps and dust, dross, fine pulp, effluents, oxide scales and other emissions that pollute air, water and ground. Blast-furnace iron making generates a lot of furnace gas (≈ 2000 – 4000 m³ per ton of iron). Plants’ gas-cleaning systems effectively defend the atmosphere from dust and deleterious gas emission.

Almost a year ago it was written in mass media during groundbreaking for the blast furnace №7 the future blast furnace should be as modern and ecologically safe as possible. Producing 7.5 tons of iron per day it will be equipped with modern gas handling systems that will twice and a half increase the air purification rate. You must admit that it’s very impotant for our industrial city’s ecological conditions and helps fighting for clean air.

There could be many sceptics but when the dedusting system for this particular blast furnace is fabricated by plant workers right in front of your eyes all doubts recede step by step. Domestic iron and steel plants use different dry and wet gas cleaning systems for dust and gas trapping. The cleaning system of the blast furnace №7 consists of: axial cyclone, scrubber and demister.

The cyclone is a gravity-inertial type of equipment. Its operation is based on the centrifugal forces formed during gas flow rotation inside the collector. Particles of five or more microns are collected by centrifugal dust collector of the most perfect design. Cyclones advantages are low price, simple design, the disadvantages are relatively high pressure resistance gas side and big size.

The gas and dust removal facility’s detailed drawings were developed by some very experienced design engineers. V.V. Zakharova started the process. But when she had reached the most difficult bottom part of the air cleaner, she transfered this work to the first rank designer engineer A.P. Logvinov. “Earlier, working on other blast furnaces our factory tried to take orders for the cyclones of simple construction. This is the first time we have such complex installation”. 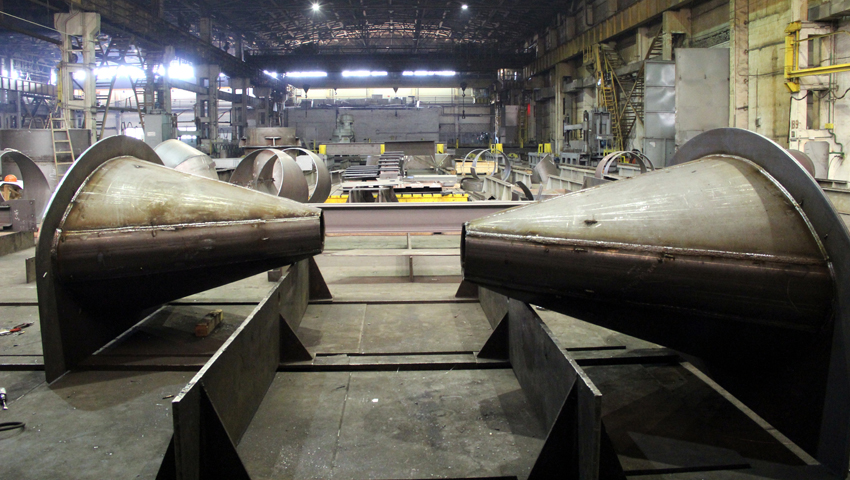 Made of several cylinder and conic parts it weighs 390 tons. The 57 meters structure’s drawing was developed by Alexander Petrovich by hand with lead pencil on a drawing table. “The funnels which not long ago were in the workshop, will be turned down. The generic cone transforms from circle to ellipse and then to two small combined cones. It was very difficult to imagine and I couldn’t wrap my mind around. It took about three weeks. Alexandra Bulovich helped me. The coworker designed 3D-model. I suggested what to do. And she confirmed the vertex of cones’ positions. Thank her!” In fact the next detailed drawings for the centrifugal dust collector were developed by her.

These cones have a lot of curved and only some rolled parts. In Alexander Petrovich’s opinion the drawings design, semi-finished product manufacturing, its follow-up assembly and welding were very difficult and complex processes for all plant workers.

The head of Central Plant Laboratory agrees with him. “We have many complexities manufacturing the semi-finished cone. Our plant has no single-functioned equipment to curve them. Our technologists find a way out by using ordinary machines for special operations. Then the assembly and welding may have defects”.