TulaCherMet: How the Steel Was Tempered

TulaCherMet: How the Steel Was Tempered

Magnitogorsk, Novolipetsk, the Orsko-Khalilovsky metallurgical plants, pipe plants in Kamensk-Uralskiy and Pervouralsk, Mill-5000 in Vyksa – are just examples of NTZMK’s objects in this field on the territory of Russia. In the 70-80s tens of thousands tons of constructions produced in Nizhny Tagil were exported. Bosnia and Herzegovina, Iran, Nigeria, Pakistan – steelmakers of 3 continents are familiar with mark NTZMK.
However, since the beginning of the 90s the flow of NTZMK products for the metallurgical industry has become insignificant. Virtually the only more-or-less major project of the last decade was the construction of dust-coal fuel infector for EVRAZ NTMK (2011). The rapid growth of heavy industry in the developing East European and Asian countries limited the need in expanding production capacities. More than 2 billion tons of “black iron” annually produced by China, India and South Korea do raise the question about the future of Russian steelmakers. Semi-finished products: like cast iron and low-alloy steels are in no demand. Heavy deprecation of basic equipment and obsolete technologies lead to the loss of competition for much younger Asian producers.
It seems that the solution is obvious: modernization of basic production assets and implementation of high conversion products: production of special steels, widening the range of profile products.  And, although not all Russian steel companies, as we see in the example of EVRAZ, are ready to start investing in their future, there are also some positive examples.
So, more than 3 thousand tons of NTZMK production in 3rd and 4th quarters of the year will  go to Tula, where the construction of a new casting and rolling complex has begun. The initiator of the construction, JSC TulaCherMet, is an enterprise with the 85-years long history, one of the key productions of metallurgical base in Central Russia.
In a sense, Tula metalworkers at some point have become hostages of the long-standing traditions of their enterprise. Like hundred years ago, the main production of the plant was and is concentrated on the lowest value levels of products: cast iron and related building materials derived from waste ore and agglomerate (crushed aggregate, granulated slag). In order to become competitive full cycle enterprise again, the company needs to make a powerful revolutionary technological breakthrough in a very short period of time. 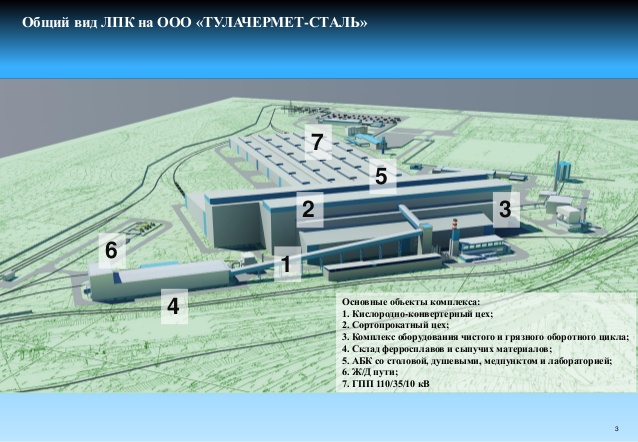 “In Tula there will be steel!” repeats TulaCherMet’s corporate newspaper “Novotul′skij Metalworker”. Within the project framework of the new casting and rolling complex with productivity of 1.5 million tons by the end of the year 2017 it is planned the blast furnace reconstruction, the erection of air separation units, the department of lime production, oxygen-converter and sorting plants, warehouse for ferroalloys. Engineers from NTZMK started working on the drawings for the last of the objects listed at the end of May. Kalinina I.P. says:
– At the very beginning of the work with such a large-scale project, it is difficult of course, to provide a general impression of it. We are currently working with several specifications drawings for a warehouse of ferroalloys and bulk materials. A massive bunker, bunker beams, flooring boards from the very first days of work make up a pleasant contrast to the delicate braces and tiny beams of Antipinsky Oil Refinery. It is very solid both in weight and the dimensions of   design, they are very responsible constructions, maybe not so complex to manufacture, as “Lahta” or Pavilion in Astana, but also put before the designer a number of interesting tasks.
A curious fact, confirming our theoretical conclusion, to put it mildly, of not a best state of domestic metallurgy, we have learnt from our conversation with the head of Construction Bureau. Paradoxically but the fact is that for the construction of the Russian metallurgical Complex some foreign steel grades may be required! Thus, according to initial calculations by designers, sufficient wear resistance for the constructions of this kind can provide only produced in Sweden steel HARDOX ®. It is not surprising that one of the project tasks implemented thankfully a to significant government support, is the import substitution. As promised by the Tula metallurgists, the focus on the new Casting and Rolling Complex under construction will be the production of special steel marks for the automobile and shipbuilding, construction of buildings and structures in extreme north and seismically dangerous zones in the Far East. The erection of the 2nd process line of the complex in 2020 will provide an opportunity for Tula masters to bring production of these types of profiles up to 3 million tons per year, which will significantly reduce the dependence of domestic construction facilities and machine building from foreign materials.
– There were not metallurgical projects of such level for a very long time, – I.P. Kalinina concludes, – and in any case it is nice that NTZMK once again directly participates in such an important for the country process.
News
0 Comments